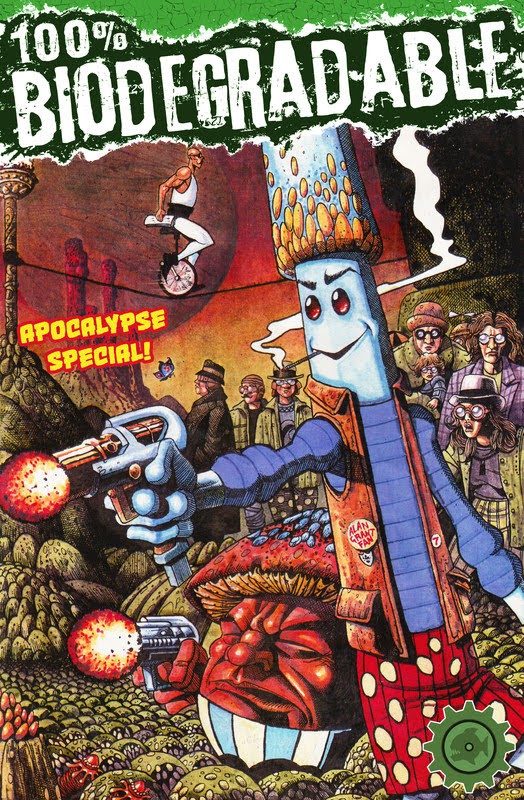 Inside the self contained 100% Biodegradable Apocalypse Special:

In a world populated by Elvis impersonators, being anything other than ‚The King‘ is met with swift retribution in Apocalypse Now Or Never by Jimmy Furlong, Andrew Hartmann, Val Ramon and Ken Reynolds.

A cockroach and a cup of tea bring about the end of the world in Rusty The Cockroach by Stu Smith, David Hailwood and Simon Mackie.

At the edge of existence, a lone survivor waits out the apocalypse in his local tavern in Last Orders by David Hailwood and Stuart Giddings.

The last human wages war on a deadly alien menace in a truly unique fashion in Love and War by David Hailwood and Dave Thomson.

A newly elected alien leader builds a wall around the city to protect his people from parasitic outsiders in Insular by Mark Bertolini, Jerome Eyquem and Micah Myers.

The Four Horsemen of the Apocalypse form a boy band with the intention of using reality TV to bring about the downfall of mankind in Apocalypse Boys Ride Out by David Hailwood, Brett Burbridge and Ken Reynolds.