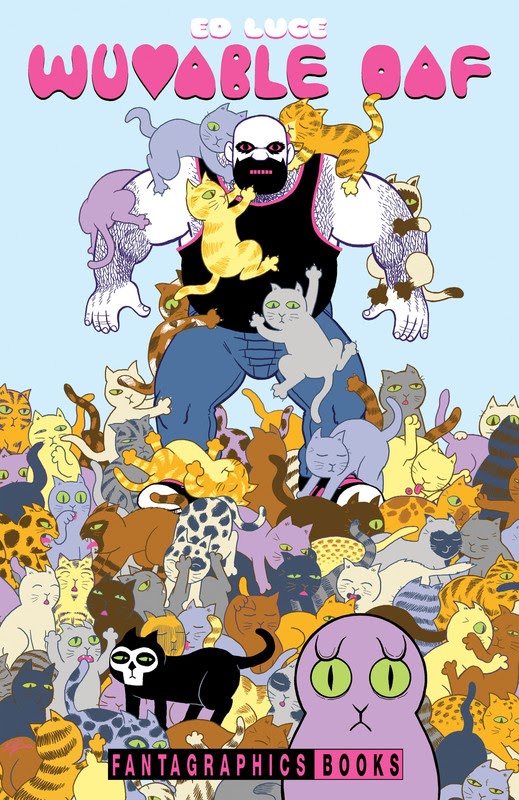 Like Sex and the City but with adorable, ex wrestler hairy gay men (or bears), Wuvable Oaf is Luce’s debut graphic novel. This book fills a romance comics hole by portraying a likeable gay male character that is both fully realized and relatable. Mostly playful, but sometimes serious, Wuvable Oaf captures the levity of loneliness. Luce delivers a rom-com that would leave Zack Galifianakis and Zooey Deschanel feuding over who got to play Oaf in a hypothetical movie adaptation.

Oaf is a large, hirsute, scary looking ex wrestler who lives in San Francisco with his adorable kitties, and listens to a lot of Morrissey. The book follows Oaf’s search for love in the big city, especially his pursuit of Eiffel, the lead singer of the black metal/queercore/progressive disco grindcore band Ejaculoid. Luce weaves friends, associates, enemies, ex-lovers, and the pasts of both men into the story of their courtship. Like Scott Pilgrim, Love and Rockets, and Archie, Wuvable Oaf explores the joys and pains of romantic conquests, set against the backdrop of the San Francisco scene. After decades of comics about boy loves girl, Luce finally gives readers of all orientations some insight into man-loves-man. Oaf’s silly, sweet, and sometimes sexy stories will win over everyone’s heart.