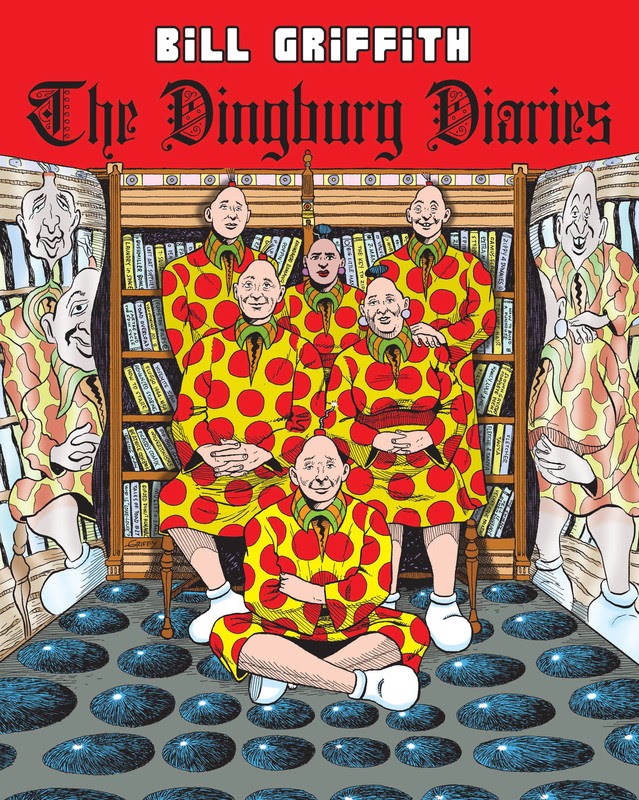 Comprising a full two and a half years worth of dailies and full color Sundays, The Dingburg Diaries is the third Zippy book featuring tales of „Dingburg, the City Inhabited Entirely by Pinheads Zippy’s home town. There’s even a long series of „Historical Dingburg“ strips, chronicling the pinhead population through the years, from 1840, when Dingburg’s „Town Fool“ accidentally invented disco, to 1958 when Dingburg Beatniks flourished in the town’s Bohemian neighborhood. Like, Yowl, man.

God also has his own chapter (and verse). In the guise of a clip art „authority figure“, he dispenses unwanted advice and conditional love upon the citizens of Dingburg. His tendency to cross dress reaches new heights when he appears in a performance of „Swine Lake“, wearing a tutu. Sacrilegious, yet sensitive.

There are large chunks of Mr. The Toad, Zerbina, Little Zippy and the rest of Griffith’s cast of characters throughout this expanded collection. Published in a larger 8″ by 10″ format, The Dingburg Diaries also features a big color section, showcasing Griffith’s inventive palette. There are parodies of the paintings of Edward Hopper and Film Noir, and „Griffy’s Top Ten List On Comics and Their Creation, a semi serious mini tutorial on everything (well, ten things) he’s learned in over forty years at the drawing board.