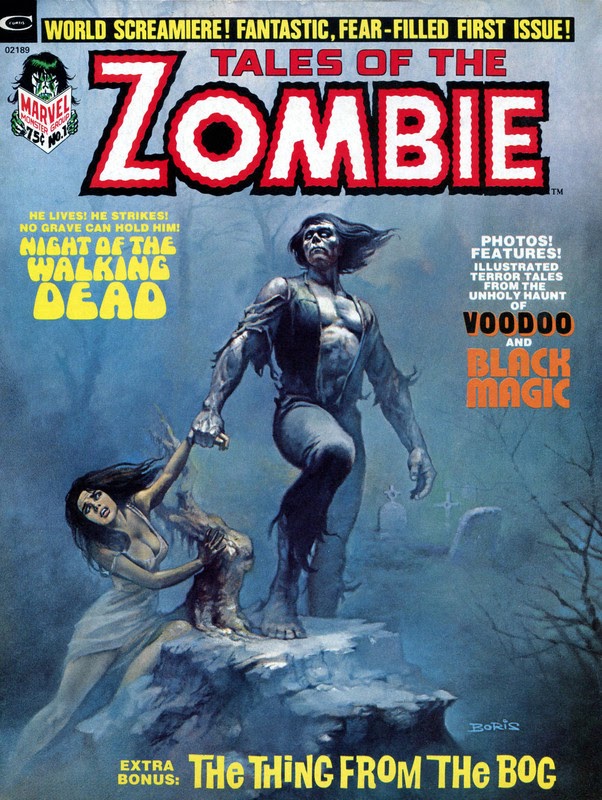 The Zombie (Simon William Garth) is a fictional supernatural character in the Marvel Comics universe, who starred in the black-and-white, horror-comic magazine series Tales of the Zombie (1973-1975) in stories mostly by Steve Gerber and Pablo Marcos. The character had originated 20 years earlier in the standalone story „Zombie“ by Stan Lee and Bill Everett, published in the horror anthology comic book Menace #5 (July 1953) from Marvel forerunner Atlas Comics.

As Lee had done years before in reviving Henry Pym from a standalone science fiction story to become the superhero Ant-Man, then-editor-in-chief Roy Thomas likewise plucked a character from, in this case, a pre-Comics Code horror tale. The initial modern story, co-scripted by Thomas and Steve Gerber and drawn by John Buscema and Tom Palmer, was a 12-page tale that led into a seven-page reprint of the 1950s story (with the art slightly altered to give the Zombie shoulder-length rather than short hair). That original story was also reprinted in 1975’s Tales of the Zombie Annual #1, and again two decades later in Curse of the Weird #4 (March 1994), the final issue of a short-lived Marvel horror reprint series.

Following the premiere, all the Zombie stories were by Gerber and artist Pablo Marcos (one of these in collaboration with writer Doug Moench and artist Alfredo Alcala. The original series‘ finale, set at Garth’s daughter’s wedding in issue #9, was a three-chapter story written by Tony Isabella (chapter 2 with co-scripter Chris Claremont), and drawn by pencilers Virgilio Redondo, Yong Montano, and Ron Wilson, respectively, and inker by Alcala (chapters 1-2) and Marcos (chapter 3).